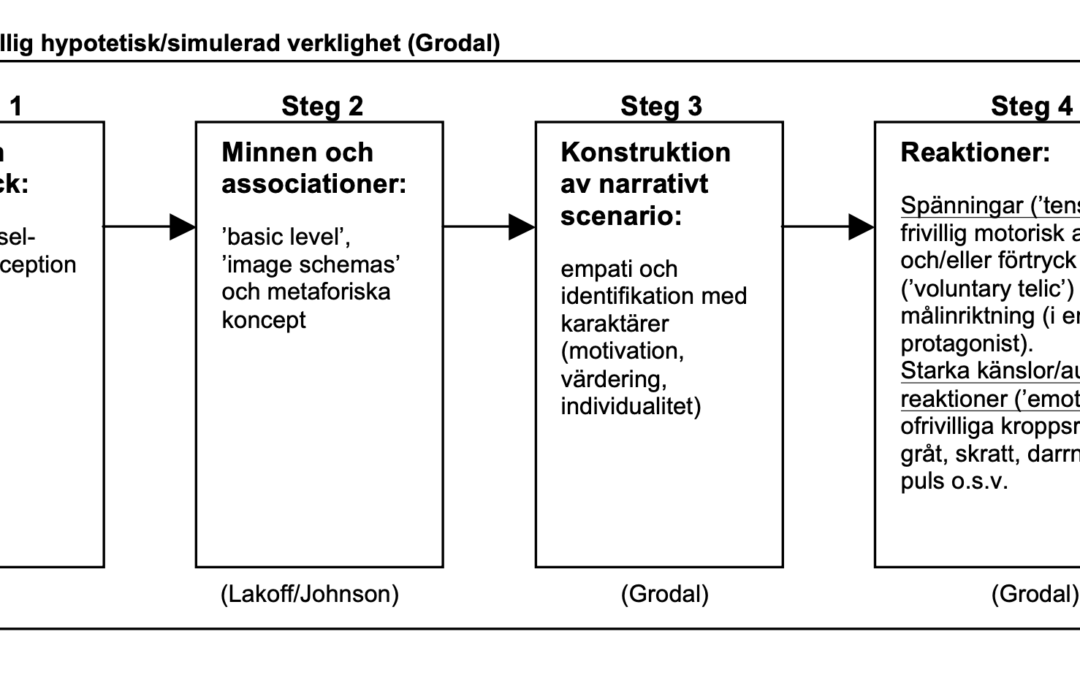 In this essay I try to explain and show how sound in film may effect the experience of a spectator. The spectator and viewer in this case is me.

By applying a cognitive method on a ten minute sequence in Jurassic Park (the T- Rex sequence), my goal is to illuminate those qualitative impressions which the sound, in its combination with the image, creates in me, as a viewer, during viewing. The cognitive method is made up of two separate theories, developed by Torben Grodal in Moving Pictures- A New Theory of Film Genres, Feelings and Cognition (1997) and Mark Johnson and George Lakoff in Philosophy in the Flesh- The Embodied Mind and Its Challenge to Western Thought (1999).

Philosophy in the Flesh deals with what the authors calls experiential cognition; a philosophical and neurological approach to the study of human consciousness, which suggests that human meaning and understanding is based on repeated bodily experiences. Through the use of experiential terms like ‘basic level’, ‘image schematic level’ and ‘metaphorical concepts’ I will, with focus on the sound design, try to shed some light on the complex memory association and cross connection processes which take place in me, the viewer, when I experience the T- Rex sequence in Jurassic Park.

What emotions might memory association and cross connection support? In Moving Pictures, Grodal provides a direction towards solving some of the mysteries surrounding viewer emotions. I use the discussions he puts forward regarding reality-status, empathy and identification and reactions, to explain some of the mental and physical emotions which I, through the memory reconstructions and connections that the sound design accomplishes, activate during viewing.

In my analysis I show that the sound design in the T- Rex sequence has a great influence on my imaginative and emotional viewing experience. As a viewer of the T- Rex sequence, I am constantly activating different experiential schemas and metaforical concepts; concepts formed during a life time of experience, through my body and its everyday interaction with its physical surroundings. In the T- Rex experience, the varying activations and cross connections of these concepts in my memory banks, triggered in many aspects by the sound design in the sequence, generates powerfull and united “sound-image” experiences. Through this manipulation of experiential concepts, I accept the T- Rex dinosaur as an extremely heavy, energetic and threatening object. I experience the children as defenseless.

These sound-image concepts also trigger my emotions and reactions. I create identification and empathy with the threatened children. I feel a voluntary, goal oriented will to take them away from the threatening T- Rex, and my heart beats faster as a result of these cinematic developments.

The different perceptual sense organs in my body is activated in many ways through the way the sound is designed in Jurassic Park. It cues me to create imaginary and qualitative “sound-image-sensation-emotion” experiences.